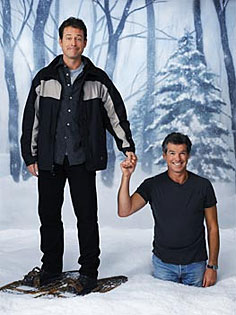 Imagine doing your very first digital shoot at Sundance Film Festival with tons of A-list celebrities for Instyle Magazine. You don’t want to be left out in the cold. DigitalFusion·Pro’s digital technicians were on-set for 11 days as Lisa Romerein shot her first all digital shoot-featuring celebrities like Pierce Brosnan, Greg Kinnear and Naomi Watts.

“We had Lisa come in to get used to the camera,” says Natalie Moy of DigitalFusion·Pro. “The biggest thing to remember is that it’s just a different medium. It has a larger dynamic range and you don’t have to worry about losing detail like you do with some film.”

Lisa knew she wanted a cool steel blue look on the final product, so after the first stills were shot, one or two images from each setup (key frames) were sent electronically back to DigitalFusion for color correction. Then, the key frames were returned to the team at Sundance and the color correction applied on-set to each of the images. Right away Lisa knew she had the look she wanted.

“It was the perfect project to do digitally,” says Romerein. “We had 54 celebrities on set and what was really nice was to quickly have hard copies so the actors could see exactly what everyone else was doing.”

Within 30 minutes of a shot, photos were available for editing on DF Studio completely color corrected. This marked the first time DF Studio has been used on a shoot while operated from a remote location. “To be able to process and post images almost immediately to the web enabled editors in New York look at the results moments after shooting them.”